Thank you for the suggestion topic!

The Instrument for Pre-accession Assistance (IPA III) concerns the programming period 2021-2027. The European Commission introduced this instrument together with the new EU multiannual financial framework.

IPA III is introduced with adoption of the Regulation on Establishing the Instrument for Pre-accession Assistance and the Regulation on Implementing Rules and Principles for IPA III[1] by the European Union, and is coherent to other funds, programmes and instruments of the Union, primarily the Neighbourhood, Development and International Cooperation Instrument. IPA III is organized into 5 windows. Each window is comprised of several thematic priorities, as follows:

IPA III does not include specific financial allocations per beneficiary country. Actually, countries will have to compete for the total of 14.162 billion euros available on the basis of their capacity and project proposals. However, IPA III introduces the principle of fair share in order to ensure certain balance and proportionality in distribution of IPA III funds among beneficiary countries. 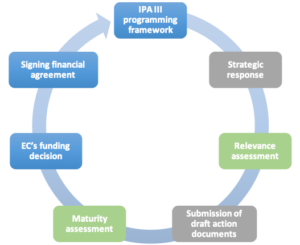 In the second half of 2020, under coordination from the Secretariat for European Affairs, sector working groups developed and presented the European Commission with 22 action fishes, of which 10 for the year 2021 and 12 for the year 2022.